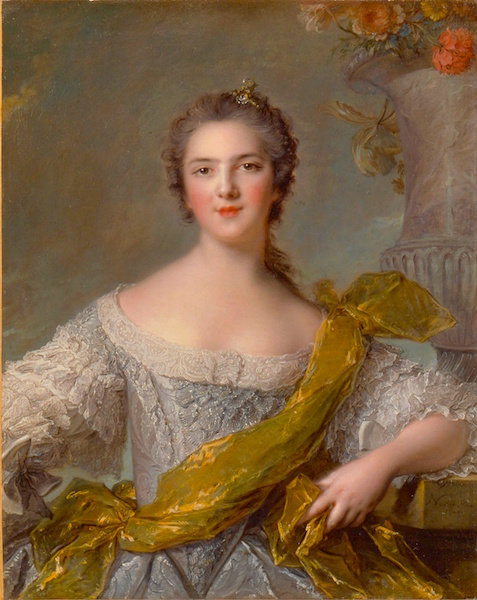 For some reason, I didn’t take a photo of the antechamber, so our tour will begin with the salon, called the Salon des Nobles. 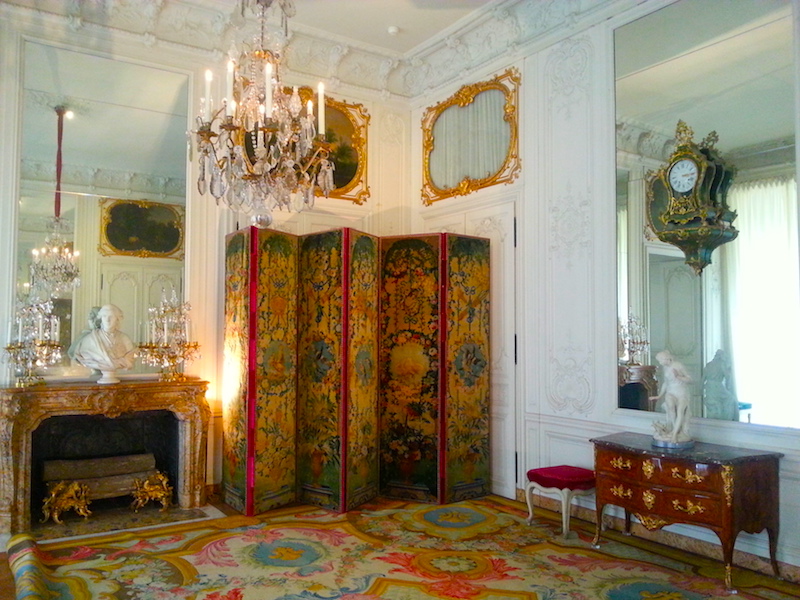 It’s important to note that the furniture you see in these rooms is not necessarily the original furniture, which was dispersed during the Revolution.  In some cases, it’s been bought back or donated, or sometimes pieces from other royal residences are substituted.  In the apartments of Mesdames, some of the furniture was in fact originally at the Chateau de Bellevue.

The large drawing room, known as the Grand Cabinet, prominently features a harpsichord. 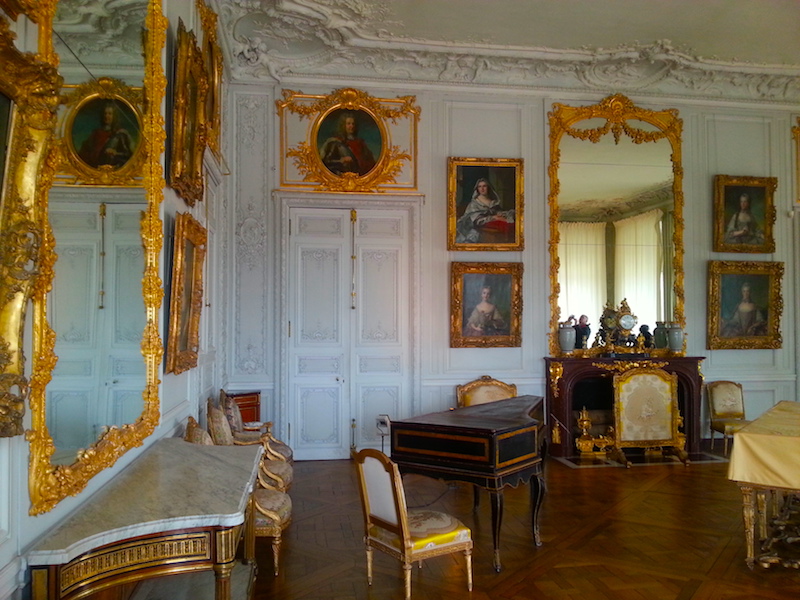 All the sisters were proficient musicians.  Mme Victoire’s instrument was the harpsichord, which she is said to have played quite proficiently.  The young Mozart, in fact, dedicated his first harpsichord sonatas to her. 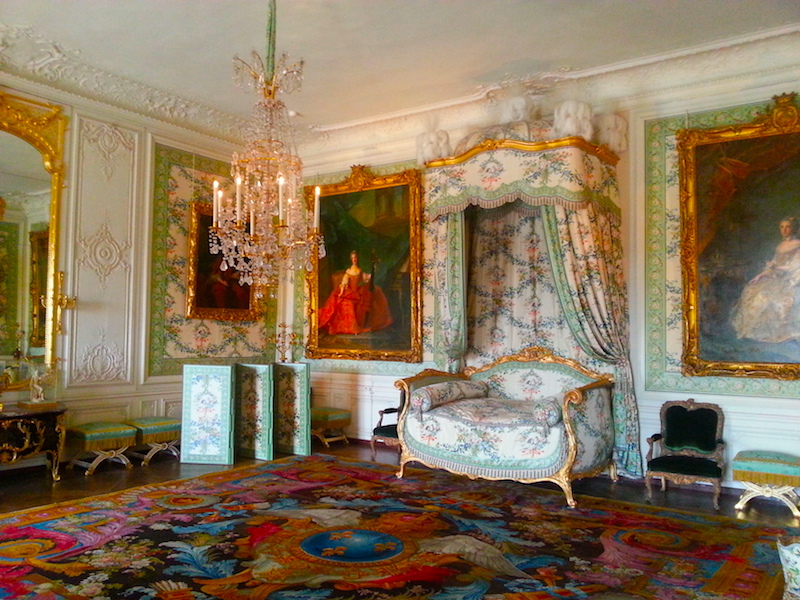 It didn’t strike me at the time, but looking at this photo now, I’m very struck by the magnificent carpet.

The next room is considerably smaller than the preceding ones.  This is Mme Victoire’s small drawing room, known as the Cabinet Interieur (please excuse the lack of French accents — I have yet to learn how to do them on my new Mac!). 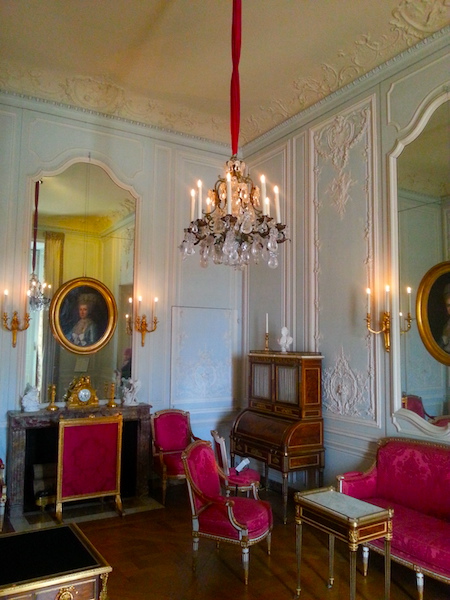 The Cabinet Intérieur. For some reason, the accents are automatic for captions.

I love the contrast of the pale blue walls and the red upholstery.

The last of Mme Victoire’s rooms is my favourite: the library, straightforwardly called the Bibliotheque. 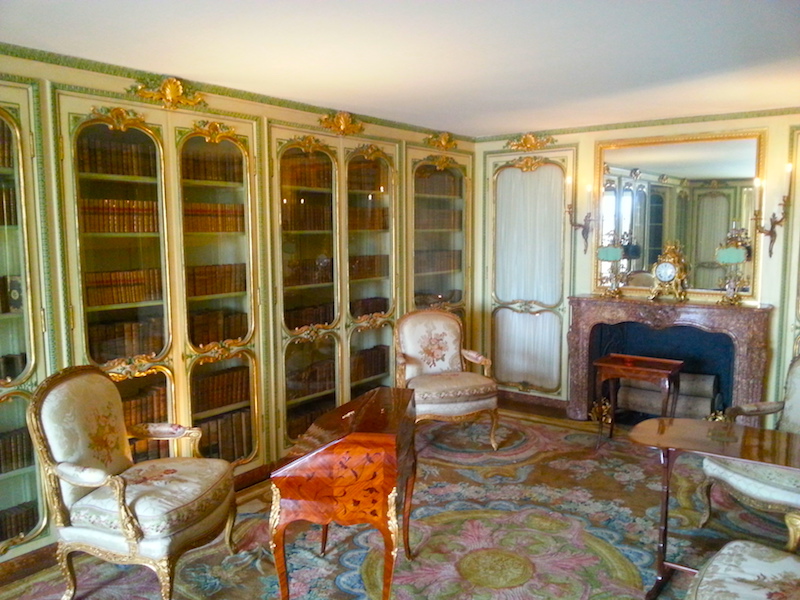 The left side of the Bibliotheque.

Of course, I love the books.  The other thing I love is the intimate scale of this room. This is one of the few rooms at the Chateau that I could actually imagine living in.  The low ceiling would have made it easier to heat, for one thing. 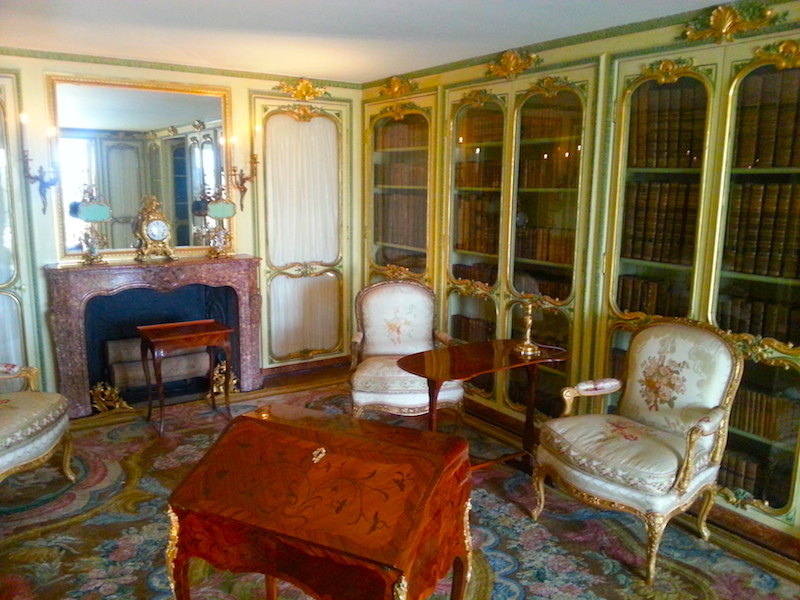 The right side of the Bibliotheque.

I remember that the information plaque identified the chairs as having come from Bellevue.

In this suite, as in all the other royal apartments at Versailles, there is a parallel row of service rooms behind the back wall.  It would be fascinating to see them, but they’re not open to the public, and I suspect they remain unrestored.

This brings our visit to Mme Victoire’s apartment to a close.  We’ll visit her elder sister Adelaide’s rooms in a future post.

Which room is your favourite?

*Philip’s mother was Elizabeth Farnese, the last member of the house of Farnese, hereditary rulers of Parma.  She passed Parma to him, rather than to one of his 2 older brothers, because they were already positioned to inherit the Spanish and Neapolitan crowns, respectively, from their father.

** The Bourbons of Parma, like the Bourbons of Naples, were offshoots of the Bourbons of Spain, who came by their throne when Louis XIV claimed it on behalf of his second eldest grandson, who became Philip V.  This was possible because Louis XIV’s wife had been the only sibling of the last Hapsburg king of Spain.  The eldest grandson was passed over because he was destined for the French throne.