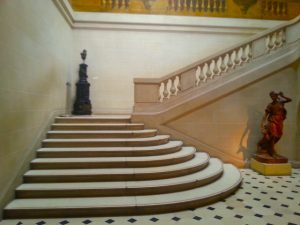 In 1899, for instance, when the Hôtel de Luynes was slated for demolition to make way for the extension of the Boulevard Raspail, the museum authorities recognized that its staircase was of a type that was fast disappearing.  Not only did it feature a classically beautiful flight of steps, it was also enveloped by marvellously theatrical murals dating from the middle of the 18th century. 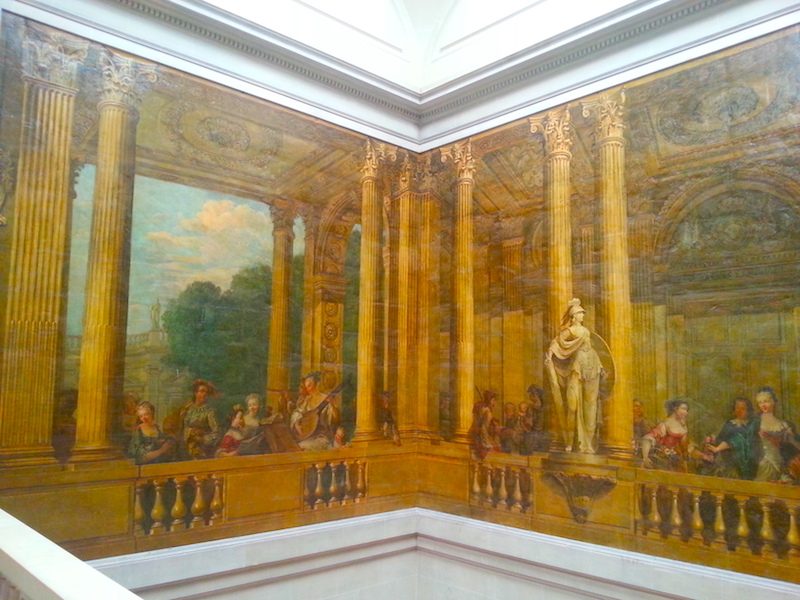 Murals around the top of the Escalier de Luynes.

The museum authorities not only arranged to salvage the murals, but also had the foresight to photograph the staircase from various angles. This later allowed the museum to recreate the staircase when the murals were installed in their present location in 1910.

All of this information, by the way, is from the informative placard on site, which I had the presence of mind to photograph.

Now, about the murals.  The Hôtel de Luynes had been erected for the Duchess of Chevreuse, one of the leaders of the Fronde, in 1660-61.  It was her grandson, Charles Philippe d’Albert, Duke of Luynes, husband of the chief lady-in-waiting to Louis XV’s queen,** who commissioned the murals.  I think it’s best if I simply translate the relevant lines from the placard: “In 1747, he (the duke) confided the decoration of the staircase to the painter Paolo Antonio Brunetti.  The latter, a master of perspective and a theatre set designer, conceived a majestically colonnaded decor, of which the coldness is corrected by picturesque figures in various poses who seem to watch visitors climbing up the stairs.” 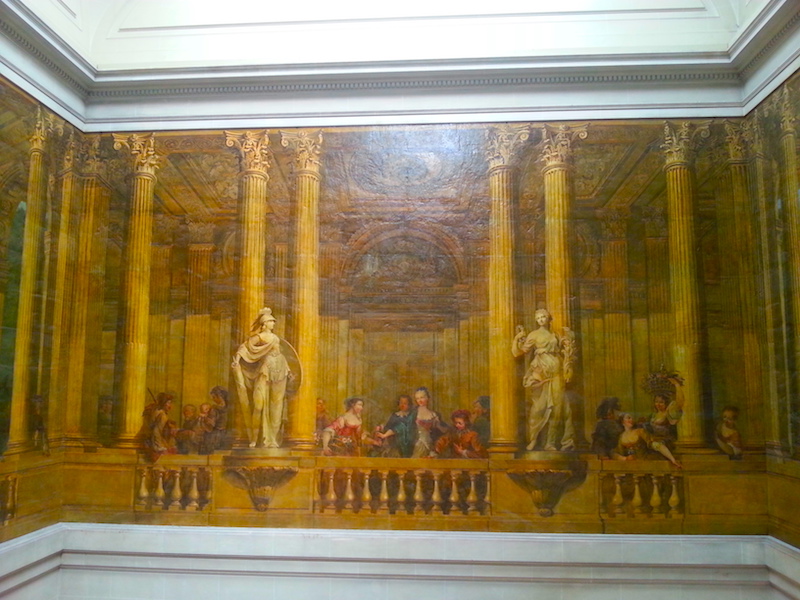 The murals seen from the landing of the Escalier de Luynes.

The placard goes on to say, “This type of decoration, which had the famous Ambassador’s Staircase at Versailles as a precedent, was fairly common in 18th century Paris.  That of the Hôtel de Luynes, famous in its time, is the only one that survives today.”

It’s astonishing to think that anyone could have conceived of destroying such a historic house.  Nowadays we forget that the spirit of 1789 tainted attitudes towards the houses of the old regime’s elite.  We love Paris’s broad boulevards, but they came at the price of losing many pre-revolutionary buildings.

Lovers of the Versailles Century should applaud the Carnavalet Museum for all the work that it has done over the last century and more to preserve the heritage of the city of Paris.

If you’ve visited the Carnavalet Museum, please let me know what you thought of the Escalier de Luynes, or anything else you saw, in the comments below.

*The first duke of Luynes was one of Louis XIII’s male favourites. Subsequent generations faithfully served the Bourbons at Versailles, and also numbered several Marshals of France.  The 4th duke is the one mentioned here.  He wrote memoirs of Louis XV’s court, which I plan to write about in future posts.  The titular 13th Duke of Luynes, Philippe d’Albert, today operates his ancestral seat, the Chateau de Dampierre, as a tourist attraction.

**Attentive readers might remember that I wrote in an earlier post about dining in the Duchess of Luynes’ boudoir at Versailles, which is today the dining room of Angelina’s of Paris.  Read it here:  http://versaillescentury.com/2016/09/07/versailles-dining-duchesss-boudoir/#more-194