It’s sad but true, dear friends.  Versailles Century’s tour of the 18C rooms at the Carnavalet Museum comes to an end today.  Our final destination is a walnut-paneled salon that contains my favourite piece in the entire museum: a divine daybed upholstered in yellow.

I would like to show you more pictures of this handsome salon, really I would.  Unfortunately, the light was so dim and you’re not supposed to use flash.  Just a few of my photos turned out decently.  Here’s one.

A wood-paneled salon in the Carnavalet Museum.

I take the wood to be walnut, but if someone’s expert eye knows better, please don’t hesitate to comment below.  There are many beautiful objects in this room.  In addition to the usual commodes and chairs, you can see a pair of prie-dieu.  There are also several interesting paintings in this salon.  I took a photo of this portrait of the Marquise de Lambert by Largillierre. 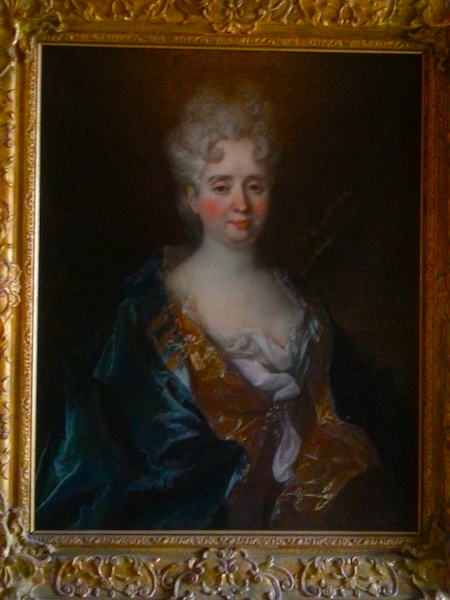 The good marquise was one of the great salonnières of Paris in roughly the first third of the 18th century.  Such luminaries as Fontenelle and Montesquieu attended her Tuesday and Wednesday afternoon gatherings, at which intellectuals and aristocrats mixed.   She was herself a writer.  On her death, Mme de Tencin “took over” her guests and started her own salon.

As mentioned, this room contains my favourite piece in the whole museum, a yellow-upholstered daybed.  This type of daybed is called a lit de travers in French.  In fact, it sits just below Mme de Lambert’s portrait. 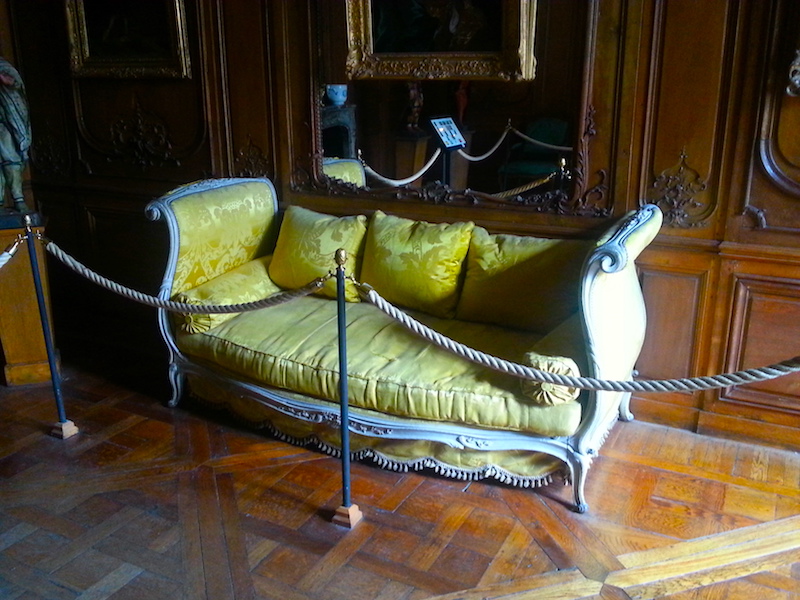 A yellow-upholstered lit de travers, or daybed, in the Carnavalet Museum.

According to the information posted on site, it’s made of beechwood.  I just love it.  The late Loulou de la Falaise had a similar one, though rather larger, which she smothered under a pile of cushions, so you couldn’t get as clear a view of it in pictures as you can of this one.  It’s one of my goals in life to have a daybed like this some day.

This post concludes our series of visits to the Carnavalet Museum.  I’ll be there with bells on when it re-opens in the autumn of 2019.

Until then, please come back to visit Versailles Century’s posts on the museum’s 18C rooms.