It’s true, dear friends.  Versailles Century, which is to say, I, David, am going to the opera.  And not just one opera, but two.

I should point out that this is a major outing for me.  It’s a 3-hour drive from my little town on the shore of Lake Huron, where I’ve been settled for the last 6 months since my return to Ontario after nearly 20 years’ residence in East and Southeast Asia, across the southern Ontario peninsula to Toronto.  To add to the fun, there will be probably be snow flurries during the drive.  No matter, though, because a full-scale blizzard wouldn’t stop me from getting to Toronto.

This weekend, you see, TWO baroque operas will be staged in Canada’s largest city.  The Canadian Opera Company is presenting Handel’s Ariodante, and Opera Atelier is mounting a new production of Purcell’s Dido & Aeneas.  We at Versailles Century are very excited about both because of course we prize the baroque opera above all others.

Ariodante will be new to me.   Based on 2 chapters of Ariosto’s Orlando Furioso, which I confess I’ve never read in its entirety, it was first staged at Covent Garden in 1735. 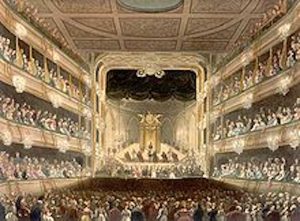 I’ve purposely avoided reading any reviews, but I’m told by friends that the COC’s production is set in the Shetland Isles.  Or is it the Hebrides?  I plan to write a review for Versailles Century, so I’ll get back to you about that.

The cherry on top of the cake: a friend with season’s tickets for two is generously both taking me to the performance AND putting me up for the weekend.  How lucky am I?

I’m even more excited about Dido & Aeneas, which is my favourite opera of all time.  I had assumed that this weekend’s production would be the same one that Opera Atelier brought to Seoul some years ago, and which I hugely enjoyed.  However, I’ve just found out that a prologue has been added and that extra dance numbers have been inserted.  The evening will thus be a good half-hour longer than you would expect from an opera that usually clocks in at under an hour.  It’s not yet clear to me whether this prologue was actually written by Purcell for the opera, or whether it’s a pastiche concocted for this production.  Again, I’ll let you know in the forthcoming review.

I’m also planning to visit the Royal Ontario Museum in search of rococo furniture from New France, about which I will also write a post.

Have you seen Ariodante and/or Dido & Aeneas?  What did you think? Let me know in the comments, or on the Versailles Century Facebook page, or on Instagram.