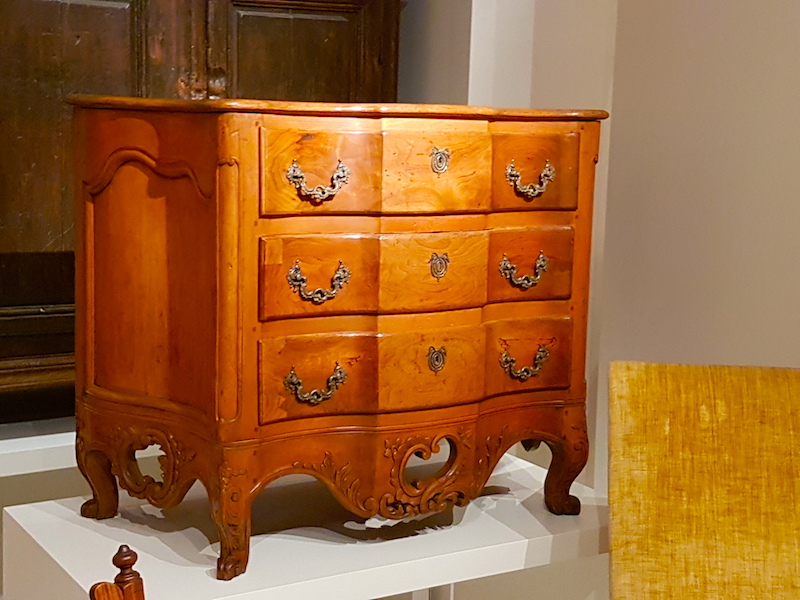 This last point is significant.  The museum’s New France catalogue, Rococo to Rustique, says of furniture made before 1800 that, “at most, only two to three per cent of original quantities still survive.  These are mostly finer pieces — those that were treasured, cared for, and passed down within families.  Very few 17th- or 18th-century homemade or rustique pieces survive; loss through fire, wear, neglect, and throwaway has been all but total.”  In other words, this is a very rare piece.

The catalogue’s remarks about furniture production of that time are also worth quoting in full, I feel:

A cultural assessment of early Québec furniture supports a view that it was produced both within and for a tradition-dependent and culturally isolated society.  Excepting some very slow shifts in design, as from Louis XIII to Louis XV styles, French-Canadian furniture was produced over two centuries with no basic changes in technology, materials, hand tools, or cabinetmaking techniques.  In that sense the French-tradition furniture-making craft remained largely late medieval in methods and extremely labour intensive, until it was overtaken by the new wave of water- or steam-powered, mechanized, mass-market furniture factories… 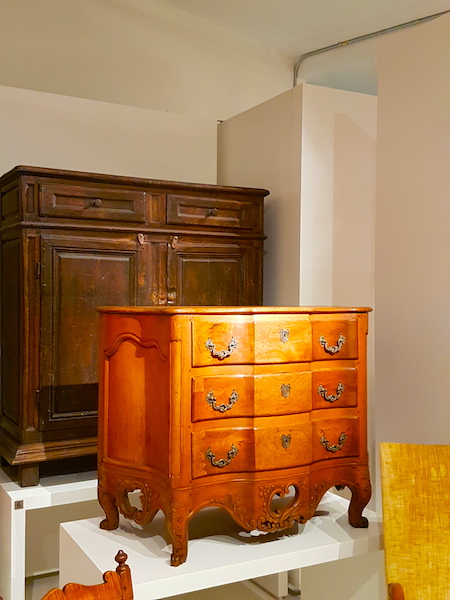 A more rustique commode is visible behind our star in the New France collection at the ROM.

The catalogue further specifies that this commode is of a type derived from the provinces of Languedoc and Provence in southern France.  The work, it says, was probably carried out by a specialized church craftsman.  In those days, the church was the major employer of artisans and craftsmen in New France.

We’re far from finished with the exhibits in the New France collection at the ROM.  Please check back regularly for more posts about the collection’s highlights.