While wandering in the Art Gallery of Ontario (AGO), I came across this miniature portrait of Magdalena Wilhelmine of Baden-Durlach (1677-1742).  Born a princess of Württemberg, she married a Margrave of Baden-Durlach, for whom she is wearing mourning here. 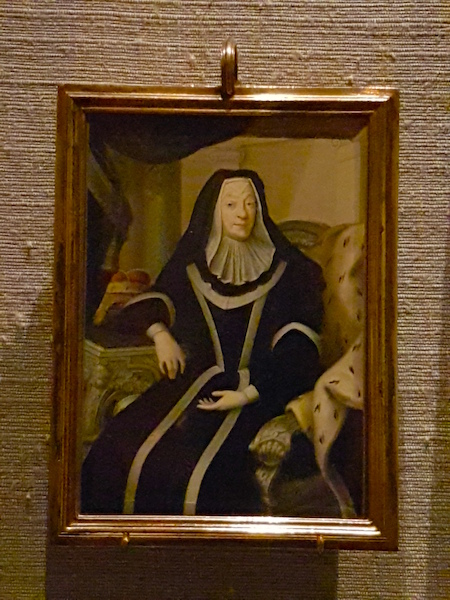 Magdalena Wilhelmine of Baden-Durlach (1677-1742) in widow’s weeds, ca. 1740.  Miniature watercolour on vellum framed in gilded metal; on display at the Art Gallery of Ontario (AGO).

Having never heard of her, I was intrigued.  A quick search on the English and German Wikipedia revealed that she was the widow of that Margrave of Baden-Durlach, Karl Wilhelm (r. 1709-1738), who founded the eponymous new city of Karlsruhe and built its spectacular Versailles-inspired palace.

Readers not familiar with pre-modern Germany should be aware that Baden, which in the 19th century was an independent grand duchy almost the size of present-day Belgium, was in the early 18th century only a small margraviate — ‘margrave’ (Markgraf) was an ancient title held by certain rulers in the Holy Roman (German) Empire before its dissolution in 1806 — with a population of about 70,000, according to Wikipedia.  Karl Wilhelm nearly ruined it by building Karlsruhe and his mania for tulips, which went for astounding prices in those days. 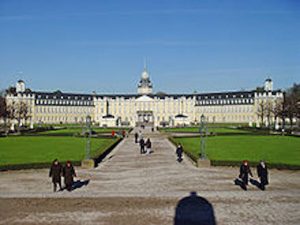 Their marriage was an arranged one, of course.  Sadly, Karl Wilhelm was a womanizer. Poor Magdalena Wilhelmine, as you can see in her portrait, had rather a large nose, and German Wikipedia also says that she was pockmarked.  Karl Wilhelm only frequented her bed until a son and heir was born.  When Karl Wilhelm moved to his splendid new capital in 1715, Magdalena Wilhelmine stayed behind in the old castle at Durlach.  They apparently never lived as man and wife again.

Their son predeceased her husband, so it was their underage grandson who became Margrave of Baden-Durlach on the latter’s death in 1738.  Magdalena Wilhelmine secured a seat on the regency council, on which she served until her own death in 1742. In this capacity, she was following in the footsteps of her formidable mother, Magdalena Sybilla of Hesse-Darmstadt.

« Previous post
On This Day: The Death of Catherine the Great
Next post »
VC Museum Visit: A Commode from New France