The first remarkable ruler of Brandenburg-Prussia in the Versailles Century was the Elector Frederick William, called the Great Elector, who reigned from 1640 to 1688. Among his accomplishments was freeing the Duchy of Prussia from its vassalage. From the end of the Second Northern War (1654-1660), Prussia was a sovereign state.  It was also outside the borders of the Holy Roman Empire, a circumstance which became significant in the next generation.

Frederick William’s successor was his son Frederick III (r. 1688-1713).  He itched to take his place among the kings of Europe, especially after his neighbour, the Elector Augustus of Saxony, got himself elected King of Poland in 1697.  On the outbreak of the War of the Spanish Succession in 1700, which pitted the Austrian Habsburgs against the French Bourbons for the crown of Spain, Frederick saw his chance.  He offered to lend troops to the Emperor Leopold in exchange for recognition as King of Prussia.  Leopold gritted his teeth and granted recognition, but stipulated that Frederick would only be known as King IN Prussia in order to underline that Brandenburg was still part of the Empire and Frederick was not sovereign there.  This was more or less a fiction, of course, but it would save the Emperor’s face.  Frederick accepted and organized a lavish coronation for himself in Königsberg in 1701.

We also have Frederick, now known as Frederick I of Prussia, to thank for the establishment of Potsdam, outside Berlin, as the summer residence of the Prussian kings. He commissioned the Potsdam City Palace, which unfortunately no longer exists.  It was knocked down by the East German authorities after WWII.  His successors added many other gardens and buildings to the Potsdam area, as we’ll see presently. 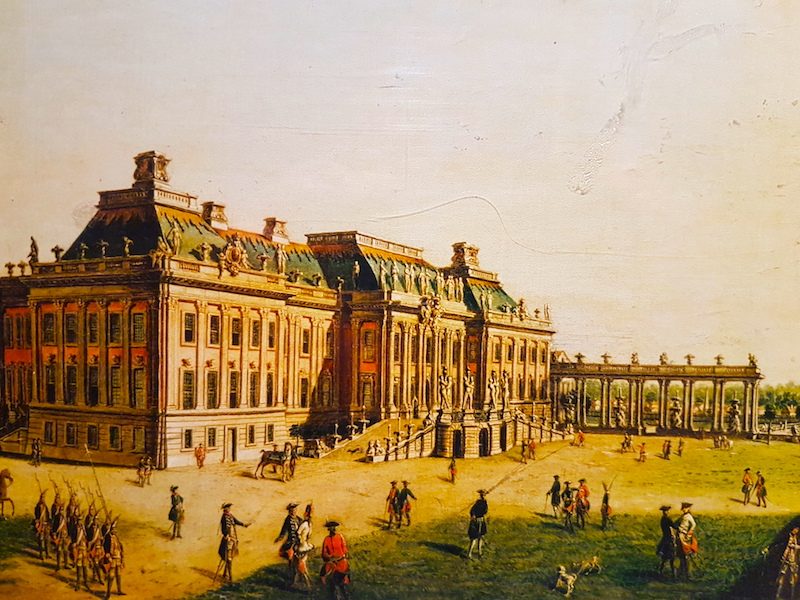 Garden façade of the Potsdam City Palace by Meyer, circa 1773. On display at the Royal Ontario Museum, Toronto.

Frederick’s successor, Frederick William I (r. 1713-1740), is known to history as the Soldier King.  He greatly increased the size and strength of the Prussian army.  A frugal, even miserly, ruler, he left a full treasury to his successor, another Frederick, called Fritz by his father, whom he never got along with.  He was convinced that Fritz would make a complete mess of ruling.  Never has a father been more wrong.

Fritz has passed into legend as Frederick the Great (r. 1740-1786), the greatest of all the Prussian rulers.  His reputation was tarnished in the 20th century by the hero-worship of him by Adolf Hitler and the Nazis, by whom Frederick himself would have been horrified. He earned his epithet ‘the Great’ by vastly extending Prussia’s territory.  As the map at top shows, Frederick conquered the large and rich province of Silesia from the Austrian Habsburgs.  He fought one war, the War of the Austrian Succession (1740-1748), to get it, and another one, the Seven Years’ War (1756-1763), to keep it.  He later also added West Prussia to his dominions by participating with Austria and Russia in the partition of Poland.

This great general was also a writer, composer, musician, and indefatigable administrator. He was all for freedom of expression and freedom of religion, and demonstrated his principles by encouraging immigration from all over Europe and allowing the press to print whatever it wanted.  His great architectural monument is the Sans Souci Palace and Park in Potsdam.  As early readers of this blog know, I have a special fondness for Frederick the Great.  There will be many future posts about him, his life, and his times. 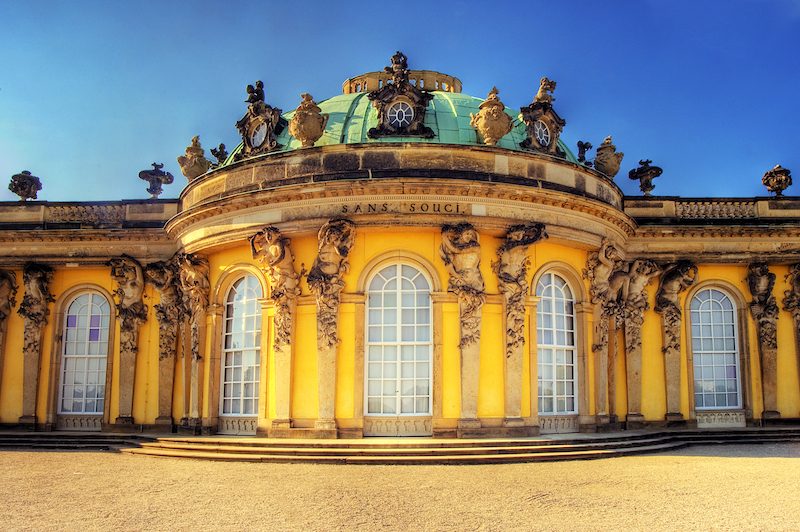 Childless himself, Frederick was succeeded by a nephew, Frederick William II.  This royal nonentity benefited from the further partitions of Poland as illustrated in the map at top. The final partition of 1795 wiped Poland from the map of Europe.  It didn’t reappear until after WWI.  Poland got its revenge in 1945, however, when the Allies assigned Silesia, West Prussia and some of East Prussia to it after the end of WWII.  The USSR got most of East Prussia (i.e. the old duchy of Prussia), which the Russian Federation still holds today. Prussia has even disappeared within Germany, as the very name was extinguished in a re-drawing of provincial borders by both the former West and East Germany.