It doesn’t go so well:

‘I had told Coincy that morning to bring him (Frederick) to my inn, where an excellent cook had prepared a nice dinner.  The King would surely have come if he had not been unmasked too soon.  He sent his regrets and included six bottles of pink champagne, which was his usual drink, enjoining us to drink his health.  I was quite disappointed.  My comrades were agreeable and apt to give him a positive impression of the stuff of which French troops are made.

At four o’clock in the afternoon he came to the Maréchal’s, who received him in a ground floor apartment, and coming towards him, said, “To whom do I have the honour of speaking, Count Dufour or the King?”

“To Count Dufour,” responded the latter with irritation.

“Will he permit me to present my wife and my daughter?”

The visit was brief.  Impatience took hold of him (Frederick), and I saw him going out into the courtyard like a young lion irked by not being at liberty.  He got back into his carriage, promising to come to the theatre, to which the marshal had invited all the ladies to fill the boxes, ordering a party to follow at Government House, to be followed in turn by a ball.

We were still waiting at six o’clock at the theatre, and the show hadn’t been started yet, when Algaloty*, one of his (Frederick’s) two travel companions, came to the Maréchal’s box, where I was, and said to him, “My lord Marshal, the King of Prussia, who is already at Kehl, has sent me to thank you for all the courtesy that you rendered to Count Dufour.  He has left and he will not be able to enjoy the play or your supper.” 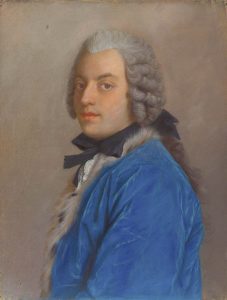 Count Algarotti, or “Algaloty,” painted in 1745 by Liotard. Credit: Wikipedia.

The Maréchal expressed his regret, quite annoyed that such a short sojourn and the absolute incognito that the King insisted on observing had not permitted him to make to His Majesty the greatest marks of his respect.

I asked Algaloty who the third person accompanying Count Dufour was.  He apprised me of the fact that it was the Count of Varte-Leben**, the King’s adjutant-general and his favourite.  Eighteen months later, the King of Prussia, passing through Prague to place himself at the head of his army in Moravia***, was pleased to recall his Strasbourg escapade, of which nonetheless he did not speak with any pleasure, very annoyed at having been recognized, for he had wanted to penetrate as far as Metz.  I always thought he held a grudge against Maréchal de Broglie for this.

M de Séchelles, with whom the King was staying in Prague, said in conversation, “The Emperor****is a very good Prince.”

“Yes,” said the the King of Prussia briskly, “Good princes should look forward to the Kingdom of Heaven, but with that quality alone it is difficult to acquire kingdoms on earth.”’

*Count Algarotti (1712-1764), an Italian philosopher, courtier, and man of letters who served Frederick on and off for decades.

***Frederick invaded the Austrian province of Silesia in December, 1740, just a few months after this episode.

****Francis I (1708-1765), nominal overlord of Germany and husband of Frederick’s enemy, the Habsburg heiress Maria Theresa.

I plan to translate more highlights from the Marquis de Valfons’ memoirs.  He had interesting encounters with many Versailles Century characters, including Louis XV and Madame de Pompadour.  Please check back regularly!