For those who haven’t read the letter, Louis writes: “Love your wife, live in harmony with her, ask God for one who suits you. I do not believe you should take an Austrian.”  Felipe in fact married twice, neither time to an Austrian, by which Louis meant a Habsburg. Felipe’s first wife was Marie-Louise of Savoy (1688-1714).  His second wife was Elisabeth Farnese (1692-1766), heiress of the duchy of Parma.  Felipe is known to have “honoured” both of his wives frequently.  In fact, he was downright uxorious.  He was also easily led by them, so while he didn’t have mistresses, he was not exactly the master, which his grandfather advises him to be: “Do not let yourself be governed; be the master.”  Louis also advises him not to have a prime minister.  No minister of Felipe’s ever had the title, but his second wife’s Italian favourite, Cardinal Alberoni, more or less fulfilled the role of a prime minister.

The Sun King also advises his grandson to avoid war and expensive building projects. Felipe later went to war a number of times, mainly to secure Italian territories for his sons by his second wife.  As for building, he had the magnificent palace of La Granja de San Ildefonso constructed outside Madrid.  He also turned the former hunting lodge of Aranjuez into a sizeable palace. 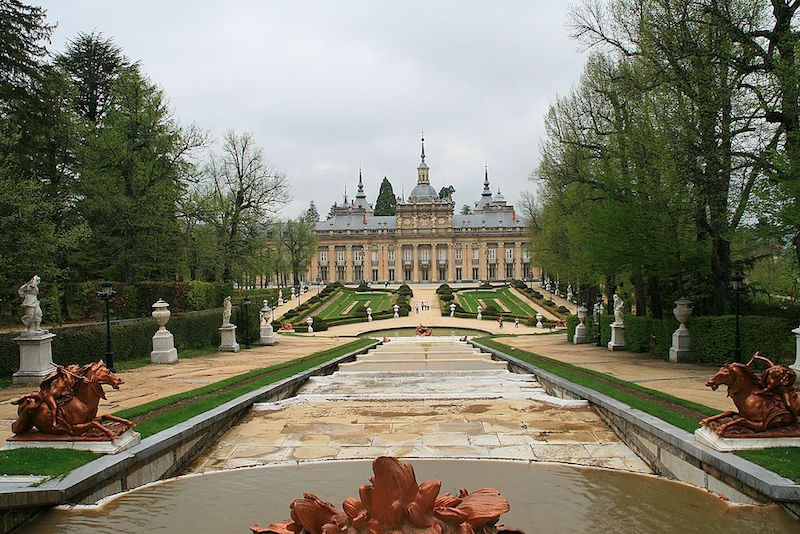 There is another piece of advice that Felipe followed.  Louis XIV writes: “Dwell in close union with France, there being nothing so good for our two powers as this union which nothing could resist.”  Felipe certainly never forgot that he was a Frenchman by birth.  He made little secret of the fact that he would gladly have exchanged his Spanish crown for the French one, about which we’ll hear more later.  Felipe loyally supported his French nephew’s (Louis XV was his elder brother’s son, and also his first wife’s nephew) wars and procured a French wife (a cousin, of course) for his eldest son.  He tried to have his own eldest daughter married to Louis XV, and even sent her off to Versailles at age 7 for her upbringing, but she was eventually sent back on the grounds that she was too young for Louis, who was past puberty at the time and needed to consummate something right away.

Louis warns Felipe against his predecessor’s widow: “Have no dealings with the Queen Dowager but those you cannot avoid.  See to it that she leaves Madrid, but not Spain; wherever she may be, observe her behaviour and prevent her from meddling in any business.”  Felipe followed this advice to the letter, at least until the end of the War of the Spanish Succession.  The unpopular Queen Mariana (Maria Anna of Neuburg, 1667-1740) was permitted to move to France at war’s end in 1713.  She lived in Bayonne, forgotten and ignored by everyone, only returning to Spain to die.

Felipe partly took his grandfather’s advice to visit his dominions.  Louis writes, “…visit your kingdoms: go to Naples and Sicily, pass by Milan and come to Flanders — it will be an occasion to see us again.”  In 1702, Felipe duly spent 9 months inspecting his Italian dominions.  He and Louis were never to see each other again, though.  In fact, other than his above-mentioned daughter-in-law, Felipe never saw any of his French family again, nor did he ever visit Flanders.

Finally, Felipe faithfully heeded Louis XIV’s admonition to secure the succession by having children.  He had 4 children with his first wife and 6 with his second; 8 of them lived to adulthood.  Three of his sons followed him on the Spanish throne: Luis I, Ferdinand VI, and Charles III.  Another son became the ruling duke of Parma, and his daughters married the kings of Portugal and Sardinia respectively.  We might also add that the present king of Spain, Felipe VI, is his great-great-great-great-great-great-grandson.