It was there, in 1797, living in greatly reduced circumstances, that the family met the Savoyard military adventurer Benoît de Boigne, who had made his fortune warring in India and recently returned to Europe.  The same age as Éléonore-Adèle’s father, he nonetheless asked for her hand.  At a stroke, the family’s finances were restored.  The couple never had children and effectively separated in 1804, he to go live on his estates in Savoy, and she in Paris. 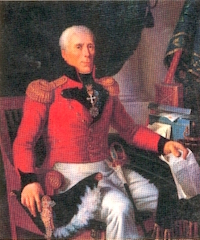 A close confidante of King Louis-Philippe’s consort Marie-Amélie, Mme de Boigne’s heyday was during the July Monarchy (1830-1848).  She hosted a smart salon and was acquainted with everyone who was anyone.  Her salon was famously mixed, the sort of place princes rubbed shoulders with politicians, artists, diplomats, and academics. Occasionally, she visited her husband in Savoy, but she is known to have had numerous ‘attachments’ in Paris. She remained in the capital after Louis-Philippe’s fall, dying immensely old and immensely rich in 1866.

Her memoirs were published in 1907.  They were highly praised and are still in print in France.  Proust was an avid reader of them and is thought to have based the character of Mme de Villeparisis in Remembrance of Things Past on Mme de Boigne.  She also wrote 2 novels that were published posthumously.

La Maréchale d’Aubemer was composed at an unknown date, but was published the year after her death, in 1867.  It was recently re-issued in France with a new introduction and notes by a French scholar.  I’m very pleased to bring it to the attention of the English-language readership for the first time.  The next post will be Chapter 1 in full!

A Childhood at Versailles, Part 1.6