Antonio Vivaldi was born on 4 March, 1678, precisely 339 years ago today.  He has always been one of my favourite composers.  Like just about any Baroque music fancier alive, I never tire of The Four Seasons.

The great man was born in Venice, the day after an earthquake.  He was sickly as a child.  It’s possible that he was asthmatic.  Given both a musical and a religious education, he became a violin virtuoso and an ordained priest.  By age 24, he was engaged to teach and compose for the Ospedale della Pietà in Venice, an institution for foundlings and other impoverished children.  The orchestra there was made up entirely of girls.  It was for them that he wrote most of his early compositions, including the The Four Seasons (1725). 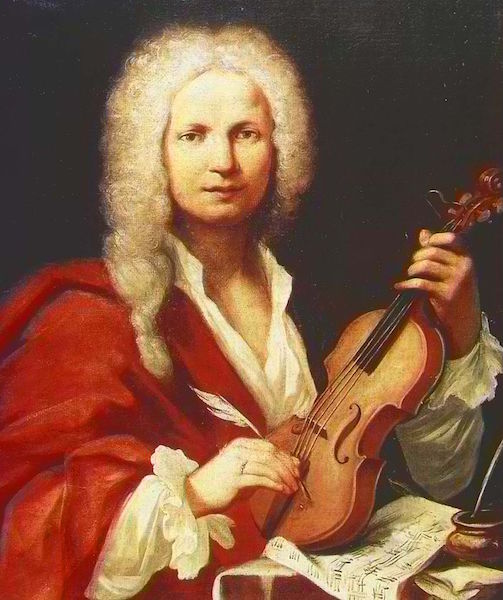 In later life, he began to compose operas, as well as act as an impresario. According to Wikipedia, there is a reference in one his letters to 94 operas.  It’s not clear how many of those he might have composed himself, as opposed to producing or arranging.  About 50 of his own operas have been identified, though not all of them are extant in a complete form.  Eventually, he attracted the attention of the music-loving Holy Roman Emperor Charles VI and moved to Vienna in 1740 in the hope of securing the monarch’s patronage.  Unfortunately for the ‘Red Priest,’ as Vivaldi was known because of his shock of red hair, Charles VI died shortly after he arrived in the city.  HIs hopes dashed, Vivaldi died impoverished in 1741, and was interred — like Mozart — in a pauper’s grave in Vienna.

My own favourite of his works is his oratorio Juditha Triumphans (1716), based on the biblical tale of Judith’s beheading of Holofernes. 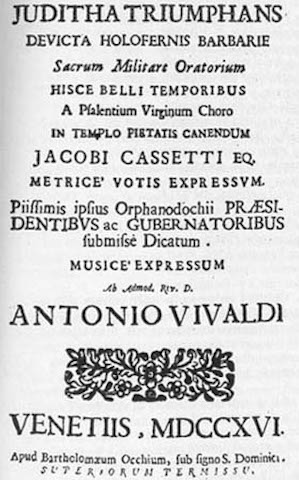 The title page of Vivaldi’s Juditha Triumphans, or Judith Triumphant.

An oratorio, it too was commissioned by the Pietà for its girl musicians. There are 11 singing parts in it, which were all performed by students.  It has recently been turned into a fully staged opera by the Italian director Pier Luigi Pizzi.  I saw his production of it a few years ago when he brought it to Seoul, where I was living at the time.  Here’s a concert video of the traditional oratorio version by the Venice Baroque Orchestra, courtesy of You Tube:

Do yourself a favour and listen to some Vivaldi today!  What’s your favourite Vivaldi work?  Please share in the comments below, on our Facebook page, or under a relevant image in our Instagram gallery (@versailles_century).

On This Day in the Versailles Century (25 February-2 March)

On This Day in the Versailles Century (18 February – 23 February)