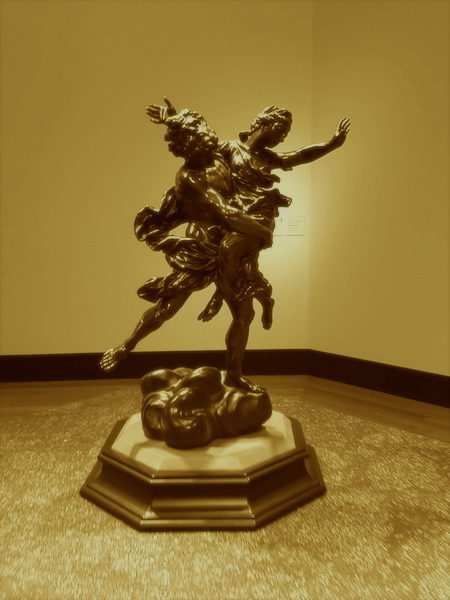 First, a word about the mythological background.  Orithyia was the daughter of Erectheus, King of Athens.  One day, while bathing in the river Illissos, she was observed by Boreas, the God of the North Wind, who fell in love with her on sight and abducted her.  Winging northwards, he set her down on Sarpedon’s Rock in Thrace, where he enveloped her in a cloud and ravished her.  They had a number of children, including two sons among Jason’s Argonauts who were killed by Hercules. Their descendants are known in Greco-Roman mythology as the Boreads.

One of our favourite Versailles Century composers, Jean-Philippe Rameau (1702-1766), composed a tragic opera about them, Les Boréades.  The opera dates from 1763, but it was not staged in Rameau’s lifetime.  I saw it performed in 2003 at the Barbican in London by Les Arts Florissants under the baton of William Christie.  Thanks to the magic of YouTube, you can see the same production, but at the Opéra National de Paris, here:

The sculptor of The Rape of Orithyia by Boreas, Giovanni Battista Foggini, was born in Florence in 1652.  He was apprenticed to the Roman sculptor Ercole Ferrate for some years.  In 1676, he was recalled to Florence to become one of the court sculptors to Grand Duke Cosimo III.  In  1687 he acquired his own foundry and also became the Grand Duke’s Superintendent of Works.  Foggini served Cosimo until his death in 1723, and then his son, Gian Gastone, the last Medici ruler of Tuscany, until his own death in Florence in 1725.  According to the Wikipedia article about him, Foggini is known principally for small bronze works, many of which he made for export.

If you’re in Toronto, I encourage you to drop by the AGO.  Its Versailles Century (1682-1789) collection is small, but contains a number of bronzes and some interesting miniature works in ivory from the period.  There’s a Boucher, too, but it’s not currently on display.

Have you visited the AGO, or have you seen any of Foggini’s other works?  Please share below, on our Facebook page, or under the relevant image in our Instagram gallery (@versailles_century).