Though in modern times he’s acquired a reputation for Spartanism, Frederick the Great (1712-1786) did himself proud at table. 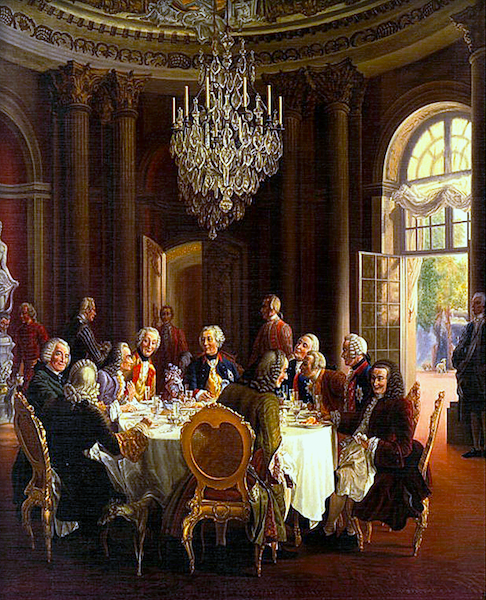 Die Tafelrunde by Adolph von Menzel (1850), once in the National Gallery of Berlin, where it was burned during the bombing that the museum sustained.  Fortunately, numerous copies and prints exist.   Credit: Wiki Commons.

The image above shows Frederick at ‘dinner’ (actually lunch, since the meal began at one o’clock in the afternoon) with a circle of friends in the beautiful Marble Hall at Sans Souci. Frederick is seated at centre, and Voltaire is sitting at far right.  Dinner could last for several hours if the company was convivial, and it was the main meal of Frederick’s day. The Prince de Ligne, visiting in 1780, records dinner as having lasted 5 hours.  Towards the end of his life, Frederick ate nothing but a bit of fruit in the evenings.

In his 1999 biography, Frederick the Great: A Life in Deed and Letters, Giles MacDonogh devotes several passages to the great man’s eating and drinking habits.  One of the earliest passages describes Frederick’s astounding coffee consumption.  In the king’s own words: “Only six or seven cups in the morning now…and after lunch just one pot” (p183).  In his youth, he once drank forty cups in one day!

Breakfast was very early since Frederick rose no later than 4am.  Apart from coffee, it consisted of cold meat and seasonal fruit. He favoured the sweeter fruits, such as strawberries.  He also liked to have something dessert-like.  MacDonogh mentions meringue as an example.

Dinner generally meant an assortment of seven to ten dishes.  MacDonogh is worth quoting in full here: “The dishes were generally a blend of French and Italian: broth inflamed with ginger and nutmeg, boiled beef with vodka, polenta with an inch-thick crust of parmesan cheese and more spices, noodle pasties, savoury puddings and macaroni with parmesan cheese, butter, and garlic; as well as a few of the doughtier German foods beloved by his father — cabbage or sauerkraut, eel pâtés and yellow peas. He loved cheeses and had them brought to him from all over Europe” (p380).

All of this sounds good to me, except that Frederick apparently liked his food highly spiced.  There is a legend that he added spices by the spoonful to the food on his plate. MacDonogh says eye witnesses denied this, although they all agreed that the dishes as they came from the kitchen were quite strongly flavoured.   He also had the curious habit of adding mustard and peppercorns to his coffee.

And what to drink?  Frederick rarely overindulged, but he was a lifelong drinker of Tokay and champagne.  The Marquis de Valfons, who met Frederick in 1740 when he was on an incognito visit to Strasbourg, records in his memoirs that he received a dozen bottles of pink champagne from the king, whose note claimed that it was his favourite drink.

I hope you’ve enjoyed this insight into the food and drink of one of the greatest rulers of the Versailles Century (1682-1789).  I think I’ll go buy a bottle of pink champagne now!