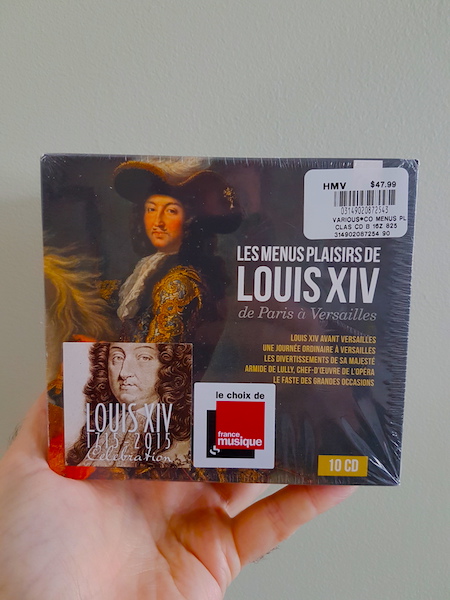 It comes with a thick booklet full of illustrations and essays.  One of them describes the music played for the King throughout his day.  First, musicians appointed to the royal bedchamber played during the ceremonies of the Lever (getting up).  Then, of course, there was music during the 10:00 mass that he attended every day in the chapel.  Motets were played, generally ones written for the purpose.  Lully pioneered the form, and later no less than 4 composers shared the duty of composition and the musical direction of the orchestra and choir.  The most celebrated of them was probably De Lalande.  After mass, the King returned to his council chamber to work until dinner (our lunch).  While he ate, there was music from a band.  On holidays and feast days, the 24 ‘King’s Violins’ played during the meal.   Afterwards, he either rode to hounds or took a walk in the gardens.  If the latter, there were often strolling musicians.  In the late afternoon, there was another visit to the chapel, where there was of course more music.  Three evenings per week he hosted the court at receptions known as ‘Appartements.’  They always started with a concert of musical selections, often extracts from Lully’s operas.  The other evenings of the week were given over to theatrical performances, which naturally had musical interludes.  Charpentier, for instance, composed the music for Molière’s play Le Malade Imaginaire (The Hypochondriac).   At 23:00, the King supped with members of the royal family to the strains of musical accompaniment, often de Lalande’s Symphonies pour les Soupers du Roy (Symphonies for the King’s Suppers).  Finally, when the King retired for the night, the composer Robert de Visée (1655-1732/33) was often on hand to play his latest compositions for the guitar during the ceremonies of the Coucher (going to bed).  De Visée’s two published collections of guitar music were dedicated to the King, whom he also gave lessons to, according to French Wikipedia.

The selection in the above video is a sarabande for guitar by de Visée, played by Thomas Malapanis.

In fact, Louis XIV is known to have played both the guitar and the lute.  He was taught them as part of his education.  The choice of instruments was perhaps influenced by his mother, Anne of Austria, who despite her name was a Spanish princess.  He sometimes played for his womenfolk and favoured courtiers.

What’s your favourite piece of music from the time of Louis XIV?  Please share below, on the Versailles Century page on Facebook, or under a relevant image in our gallery on Instagram (@versailles_century).