It’s true, dear readers: VC is off to Mexico for the next week. Consequently, there will be no new blog posts until at least Monday, 22 May, 2017.

However, on my return, I plan to bring you words and images related to Mexico as it was during the Versailles Century (1682-1789), when it was still the Kingdom of New Spain.

For instance, late in the period, Carlos III of Spain (r. 1759-1788) initiated a number of reforms in colonial government and sent out energetic viceroys to enforce them.  One of them, Bernardo de Galvez, the 49th viceroy of New Spain who ruled from 1785 to 1788, initiated the construction of the hill-top palace of Chapultepec in Mexico City.  I will definitely visit it and report back to you.

Of course, people in Paris and Versailles were aware of Mexico/New Spain.  This French playing card from an 18C geography game in the collection of the Metropolitan Museum shows a supposed Mexican: 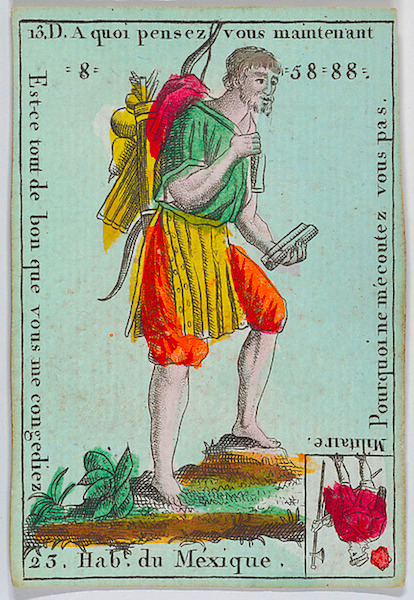 “Hab.t du Méxique from playing cards “Jeu d’Or”” by Anonymous, French, 18th century via The Metropolitan Museum of Art is licensed under CC0 1.0

Meanwhile, people in Mexico/New Spain were aware of the new ideas coming out of Paris during the Enlightenment.  Diego Garcia Loya, in his Mosaic of Mexican History, is worth quoting in full:

“In spite of the Spaniard’s efforts to to keep their colonies isolated from the rest of the world to preserve their systems, traditions and the predominance of everything Spanish, thus preventing any change of the political opinions or social and financial status, studious Mexicans, especially Creole and Mestizo clergymen, had succeeded in smuggling into the country forbidden French books with the new ideas latent in the Old World.  These books they read and secretly passed on to their friends, and a revolution of the mind began to spread, threatening the feudal order of things which had been built up and kept alive in New Spain since the Conquest.” (pp 139-140)

I looking forward to reporting in greater detail on how the Versailles Century played out in New Spain.  Though no blog articles will appear next week, I will upload on the VC Facebook page and in our gallery on Instagram (@versailles_century).  Please follow along!