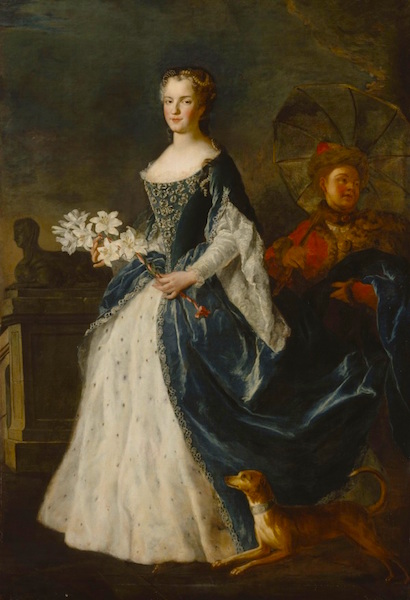 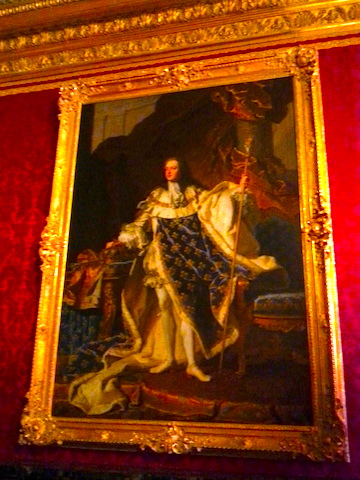 Louis XV in his coronation robes, aged 13. Photographed at the Château de Versailles in March, 2016.

In fact, Louis already had a fiancée, a little Spanish infanta — a cousin, of course — who’d been sent to Versailles to be groomed from an early age for her future role as Queen of France.  Nancy Mitford sums up the situation:

At fifteen the King was a big strong boy, forward for his age.  His fiancée, who lived in the palace, was still only five; a golden-haired darling, she appeared with him at all State functions, trotted around after him like a little pet, and was considered absolutely sweet. But boys of fifteen loathe sweet little girls and he felt humiliated at having such a small fiancée.  He sulked whenever he saw her.  The marriage was to be consummated in 10 years’ time, and meanwhile what?  The King was obviously quite ready to consummate something at once… (Madame de Pompadour, p 26)

More seriously, Louis was an only child with no living uncles or male first cousins.  Were he to be carried off by smallpox or to meet with a hunting accident, the throne would pass to his second cousin, the Duc d’Orléans.  The King’s chief minister, the Duc de Bourbon (another distant cousin), was aghast at such a prospect and conceived the plan of sending the little infanta back to Madrid and marrying Louis to a princess who would owe her position to himself.  Such a Queen would be under his thumb and a tool with which to influence the King.  Rejecting dozens of grander and better-connected princesses, the Duc de Bourbon and his mistress Mme du Prie settled on a candidate who had absolutely no power base: Marie Leczinska.

Marie was the only surviving child of King Stanislas I of Poland.  Born into the great landowning Leczinski family, he had been elected to the Polish throne in 1704 by the influence of Charles XII of Sweden.  When Charles was defeated by Peter the Great of Russia at the battle of Poltava in 1709, Stanislas and his family were forced to flee into exile.  At first they went to Sweden, and then later to Zweibrücken, a German principality belonging to Charles XII.  On his death in 1718, they were asked to leave.  Stanislas appealed to the Duc d’Orleans, then Regent of France (and father of the Duc d’Orleans mentioned above), for asylum.  It was granted, and the family settled into a townhouse in Wissembourg, a town in Alsace.  It was here that the Duc de Bourbon’s official proposal to Marie on behalf of Louis XV reached Stanislas in the spring of 1725. 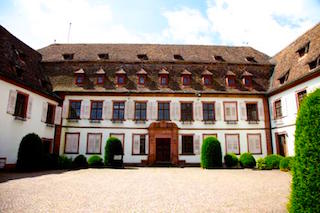 When Stanislas received a letter asking for her hand he could not believe his luck.  He rushed to his daughter’s room crying: ‘Kneel, kneel and give thanks to God Almighty!’ ‘What has happened — are you going back, as King, to Poland?’ ‘Far better than that, you are going, as Queen, to France.’ (Madame de Pompadour, p 28)

The engagement was not the political masterstroke that the Duc de Bourbon and Mme de Prie had imagined.  The match was regarded as a disappointment by the public.  It brought no political advantage to France, and Marie had no dowry to speak of.  Snobs sneered that the Leczinskis were not even really royal.  In the end, it cost the Duc de Bourbon his position.

After the negotiations were completed, Stanislas wasted no time taking Marie to Strasbourg, where a proxy wedding took place with the Duc d’Orléans standing in for the King.  On her arrival at Fontainebleau a few weeks later, the real wedding was celebrated with great pomp.  The 7-year age gap between the spouses proved to be no hindrance. The King “honoured” his bride 7 times on their wedding night.

Unsurprisingly, their first children, twin daughters, were born 9 months later.  In the following decade they had 6 more children.  Marie then decided she’d had enough, and denied the King entry to her bedroom.  It was from then on that the King took up with a series of official mistresses, of whom the most celebrated were Mme de Pompadour and Mme du Barry. 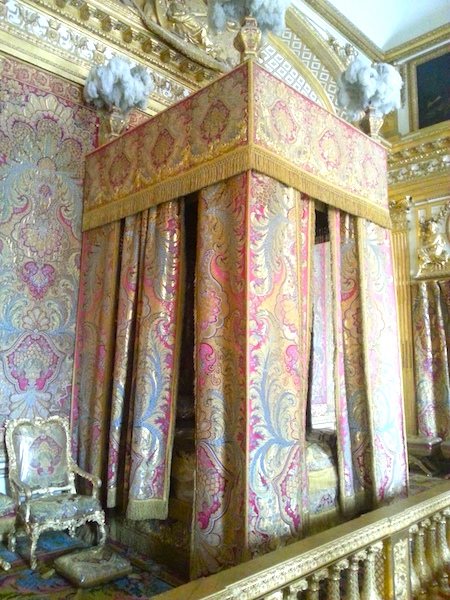 The Queen’s Bedroom at Versailles, photographed in March, 2016.

The Duc de Bourbon’s early attempts to manipulate the King through his wife were seen through by the King’s former tutor and advisor, the Bishop de Fréjus.  The Duc de Bourbon was ousted within a year and Fréjus took his place.  He received a red biretta from Rome and governed France as Cardinal Fleury until his death many years later.

The marriage worked out well for Stanislas.  With his powerful son-in-law’s help, he was re-elected King of Poland on the death of his rival King Augustus II in 1733.  Deposed again in 1736, he was granted the duchy of Lorraine, over which he reigned peacefully until his death in 1766 at the age of 88.  Marie survived her father by less than 2 years.

Louis XV and Marie Leczinska were the grandparents of the last 3 Kings of France. Through their eldest daughter Louise Élisabeth, Duchess of Parma, they are also the ancestors of the present Kings of Spain and Belgium.