The Marriage of Figaro is one of Mozart’s most popular works.  Opera Atelier, Canada’s — nay, North America’s — premier early music opera company, is currently regaling Toronto audiences with it.

A small company, Opera Atelier mounts only 2 operas a year, although sometimes an older one is revived for special performances.  The Marriage of Figaro is the fall 2017 production, while Monteverdi’s The Return of Ulysses will hit the stage of the Elgin Theatre in April, 2018.

I attended the matinée performance of Figaro, which is performed in English, this past Sunday, 29 October. 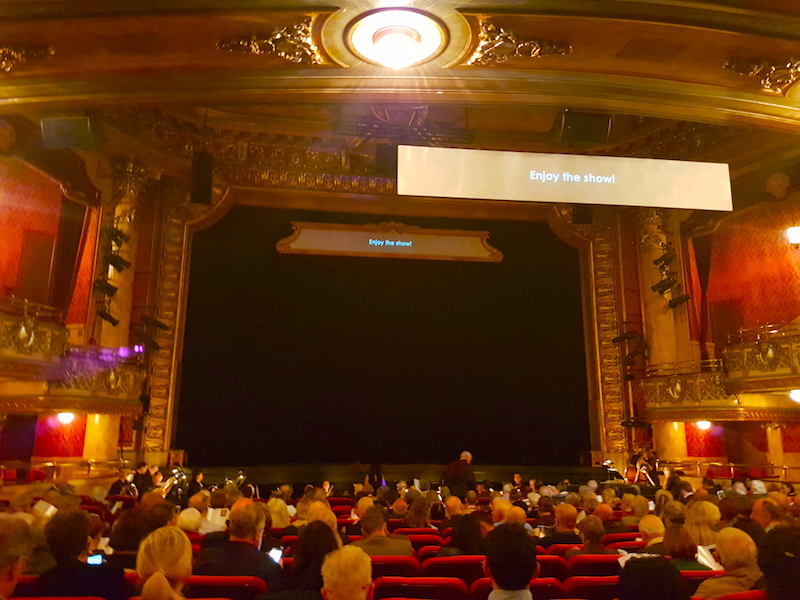 The stage at the Elgin Theatre, Opera Atelier’s Toronto home, just before the curtain went up on the first act of The Marriage of Figaro, on 29 October, 2017, at 3pm.

It had everything I’ve come to expect from an Opera Atelier production: great singing, great playing, wonderful movement, exquisite costumes, and period-inspired set design by artist and designer Gerard Gauci.

To start with the last item, the basic set is the courtyard of an 18th century chateau.  Each of the 4 acts takes place in a different space, 1 exterior, 3 interior.  These changes are indicated in various ways, for instance the opening and closing of shutters over the windows.  The most effective devices, however, are the different painted trompe l’oeil banners that are unfurled in the rear centre of the set for each act.

Martha Mann’s costumes are sumptuous and largely 18th century in style, as you can see below.  Almaviva, for some reason, is kitted out in an early 19th century-style coat. 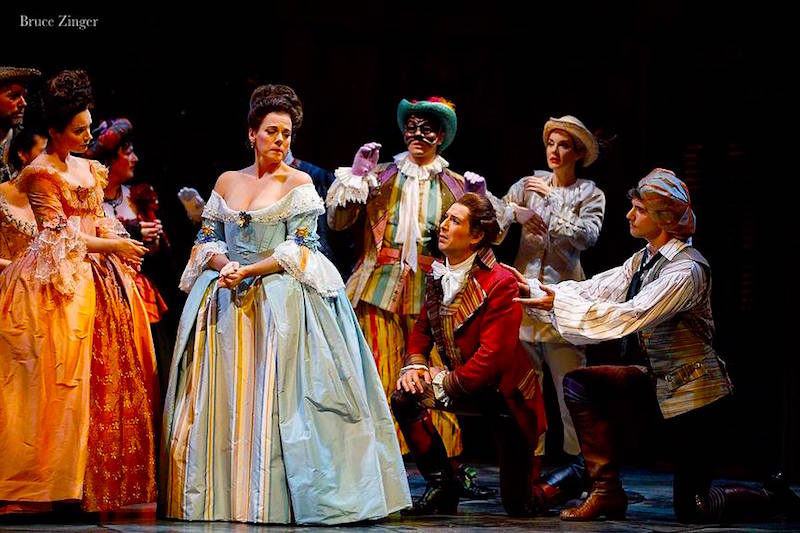 As a friend pointed out to me, Mozart didn’t write much dance music for The Marriage of Figaro, so there is less scope than usual for Opera Atelier’s famed dance troupe, the Artists of Atelier Ballet, to work its magic.  Nonetheless, the entire cast moves in beautifully choreographed fashion, even when merely crossing the stage.

All the leads — Douglas Williams (Figaro), Mireille Asselin (Susanna), Stephen Hegedus (Count Almaviva), and Peggy Kriha Dye (Countess Almaviva) — acquitted themselves marvellously in both acting and singing, but it was Mireille Lebel as Cherubino who stole my heart.

As of today, 1 November, there are still 2 performances to go, on 3 November and 4 November.  I heartily recommend booking your ticket now if you haven’t already!