Charles XII came to the throne early, succeeding his father, Charles XI, in 1697. He was only fifteen at the time. As a young man, we was nordically handsome, with a lush mane and piercing blue eyes. Charles initially reigned under a regency, but only 7 months after his accession he assumed full power.

Charles XII was a dedicated soldier who soon led Sweden into the Great Northern War (1700-1721), a lengthy and ultimately ruinous conflict. In the early stages, it went well for Charles and Sweden. The young king won a number of brilliant victories and managed to impose the king of his choice on Poland — Louis XV’s future father-in-law Stanislas Lesczcynski — as well as strengthening his position in the Baltics. In 1709, however, he was decisively defeated by Peter the Great at Poltava, in what we now call Ukraine. This defeat was to mark a watershed in the history of eastern and northern Europe: the Swedish empire, which had dominated the lands around the Baltic Sea for 200 years, came to end, and the Russian empire took its place as the regional hegemon.

Meanwhile, Charles was forced to flee south into Ottoman lands, where he remained a guest/prisoner for 5 years. Returning to Sweden in 1714, having ridden across the main landmass of central and eastern Europe from Istanbul in little more than two weeks, Charles found that his country was exhausted and nearly bankrupt. Nonetheless, he continued to prosecute the war. It was while trying to capture the fortress at Fredriksten in Norway, which then belonged to Denmark, that Charles was shot in the head and killed by an enemy bullet. His body was carried back to Stockholm in mid-winter, as shown in the 19th century painting below.

A 19th century representation of Charles XII’s body being carried back to Sweden after his death at Fredriksten.
Credit — By Gustaf Cederström – YAGDNp0MUOntjA at Google Cultural Institute maximum zoom level, Public Domain, https://commons.wikimedia.org/w/index.php?curid=22007143

Charles never married, and studiously avoided the company of women, which has prompted 3 centuries’ worth of speculation that he was homosexual. Since he had no children, the Swedish parliament elected his only surviving sibling, Ulrika Eleonora, who was then living in Germany as the wife of the Landgrave of Hesse-Kassel, to the Swedish throne.

Charles XII’s military genius and comet-like rise and fall on the European stage created a mystique that beguiled his contemporaries. Voltaire dedicated his first long work of history to the Swedish king. It was called simply L’Histoire de Charles XII, and was published in 1731. While in Paris earlier this year, I found a copy of the 1772 edition. 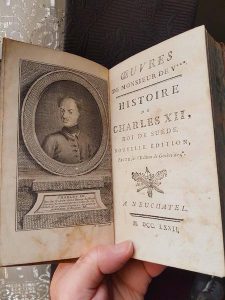 A 1772 edition of Voltaire’s Histoire de Charles XII. Own photo.