Elizabeth Christine’s own queenship came about because one of her paternal aunts, also Elizabeth Christine, was the wife of the Holy Roman Emperor Charles VI. It was through Austrian influence that the younger Elizabeth Christine was selected as a bride for the then Crown Prince Frederick of Prussia. What the young woman probably didn’t know was that Frederick, desperate to get out from under his father’s roof, only wanted to marry as a way of getting his own household. The young couple were duly wedded in June of 1733, but lived separately for a time since Frederick’s regiment was stationed in Ruppin, some distance from Berlin. In 1736, husband and wife moved into the newly built palace at Rheinsberg near Ruppin, where they remained until Frederick’s accession in 1740. Elizabeth Christine later remembered these years as the happiest of her life, but there were no children. Frederick displayed little interest in women before he came to the throne, and none at all afterwards.

As soon as Frederick became king, he moved back to Berlin. After the completion of Sans Souci, his little palace in Potsdam, he spent most of the year there when he wasn’t at war. Elizabeth Christine was assigned the palace of Schönhausen as a summer residence. He never visited it, nor did he ever invite his wife to Sans Souci. Frederick also avoided court life in Berlin. After his mother’s death in 1757, Elizabeth Christine upheld ceremonial court life in Berlin on her own. It became Frederick’s custom to dine with his wife once a year. Often he didn’t speak to her during these dinners. Legend has it that one year he astonished everyone by going up to her and inquiring after her health.

Though he neglected her, Frederick saw to it that Elizabeth Christine was duly honoured as Queen of Prussia. Her good works — she gave away more than half her income in charity — won her popularity with the people, and she was popular with the other members of the royal family. Elizabeth Christine survived her husband by 11 years, dying in 1797.

END_OF_DOCUMENT_TOKEN_TO_BE_REPLACED

In this instalment of our tale, translated by me from the memoirs of the Marquis de Valfons, Frederick, traveling as ‘Count Dufour,’ realizes that his cover has been blown:

‘Count Dufour was not yet in bed when I called at the Maréchal (Marshal) de Broglie’s to tell him what I had seen and what the innkeeper, in the know despite the silence of the count’s suite, had told me.  The Maréchal sent M de Laigle, his wife’s nephew, to offer the noble foreigner lodgings in his own house and everything that he could desire.  Count Dufour, afraid of being recognized, was very annoyed by this message and thanked M de Laigle, then Colonel d’Enghien, who let him go to bed. 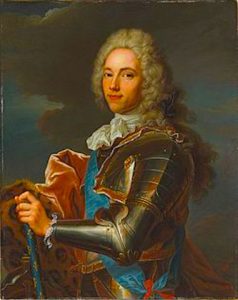