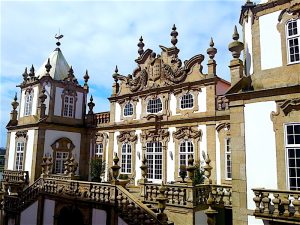 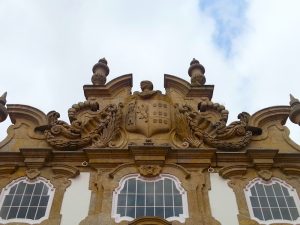 Because of its riverside location, I suspect that 18th century visitors approached the Palacio by boat and then walked through the Italian garden after disembarking, but modern visitors drive into the motor court at the rear.  There is a garden there, too, a raked one, which affords a fine view of the Palacio, the river, the bridge and the city beyond. 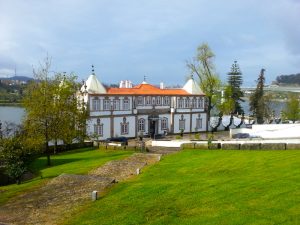 The rear facade of the Palacio do Freixo.

Entering through the central portal that you can see in the photo above, you find yourself in a Moorish-style entry hall. 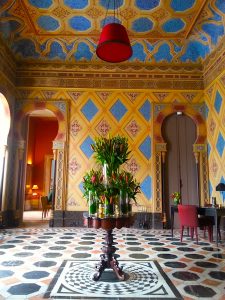 Through the arch at left there is an antechamber where guests now check in to the hotel, and beyond it is the chapel.  Small but elegant, the chapel boasts a rather spectacular marble altarpiece. 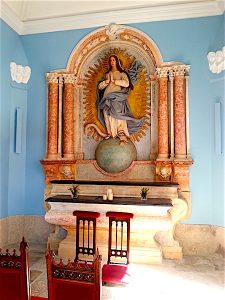 The tiny chapel of the Palacio do Freixo.

Passing back through the Moorish entry hall, we enter the Palacio’s grandest room, which I’ll call the ballroom, although nowadays it’s the main salon of the hotel.  There’s a musician’s gallery, so I assume that it must originally have been used as a ballroom or perhaps a dining hall for grand occasions. 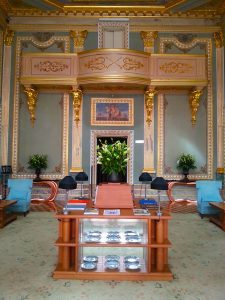 The ballroom of the Palacio do Freixo. Note the musician’s gallery.

Nasoni cleverly gave this room a flood of natural light through an oval-shaped oculus. 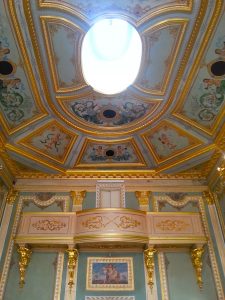 I found that it was bright enough to read comfortably even on the rainy day that I was there.

These rooms are on the first floor of the Palacio, in the European sense, by which I mean the floor above the ground floor.  Looking at the Palacio from the riverside garden, the ballroom is behind the upper row of windows in the picture below. 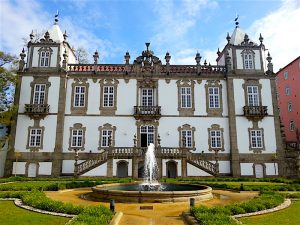 The garden facade of the Palacio do Freixo, which is also the facade visible from the river.

We’ll skip the other rooms on this floor, since they no longer have their original decor.  Instead, we’ll go down into the riverside garden.  The morning view of the Douro is gorgeous. 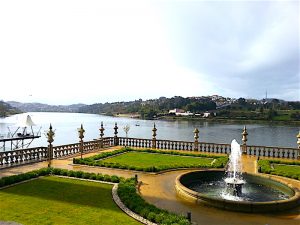 The Douro River seen from the Palacio do Freixo.

I would love to have a garden bench like this one, but since I don’t have a Rococo palace with a garden loggia, I think I’d better just do without. 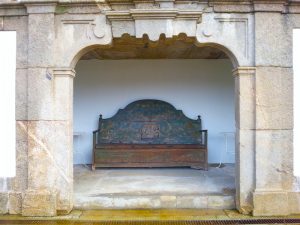 A bench in the loggia under the stairs of the garden facade of the Palacio do Freixo.

Climbing the stairs from the garden, we enter a room that seems to be still under restoration.  At any rate, it’s mostly empty and seems freshly painted. 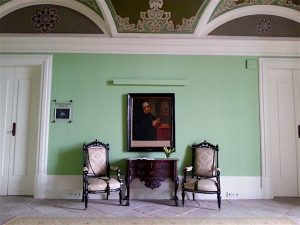 The garden vestibule of the Palacio do Freixo.

The table and chairs you see above are 75% of the current furnishings.  I think the chairs are 19th century, but the table either dates from the reign of Dom Jose (1750-77), perhaps even late in the reign of Dom Joao V (1706-50), or it’s a very good reproduction.  The fresco on the ceiling is also rather nice. 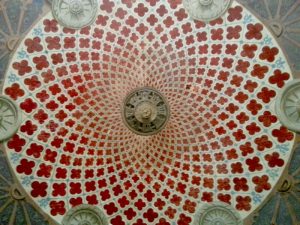 Frescoed ceiling of the garden vestibule in the Palacio do Freixo.

The adjacent chamber is currently in use as a venue for private functions, but it must have been a beautiful neoclassical salon in its original guise.  It’s still beautiful, of course, and still has its rich stucco work. 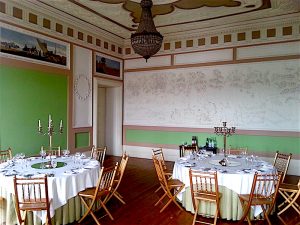 The ground floor salon of the Palacio do Freixo take a closer look at that stucco work. 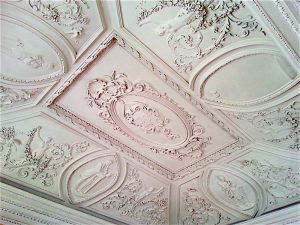 Stucco work ceiling in the Palacio do Freixo.

This concludes the tour.  As far as I could tell, none of the other public rooms in the Palacio still have their original details.  I was a bit skeptical about the state of the Palacio’s interior before I saw it, on the grounds that private sector involvement in restoration and preservation can lead to dubious outcomes, but in this case I think it’s turned out well.  The Pestana Group has done a good job of incorporating elements of modern decor and technology, and is clearly working to preserve and embellish the historical decor and details that remain.  Given its historic significance, I hope that the Pestana Group will commission an illustrated book to provide a thorough art-historical description of this delightful building.

In the next post, I’ll review the hotel operations, based on my 1-night stay.  Please come back to check out the review! 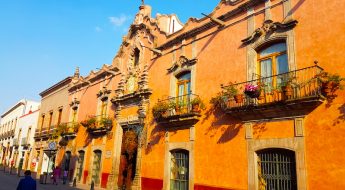 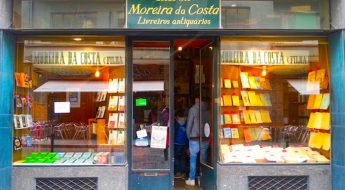 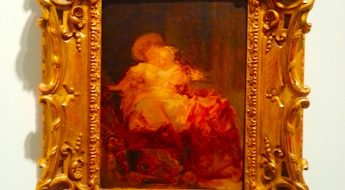