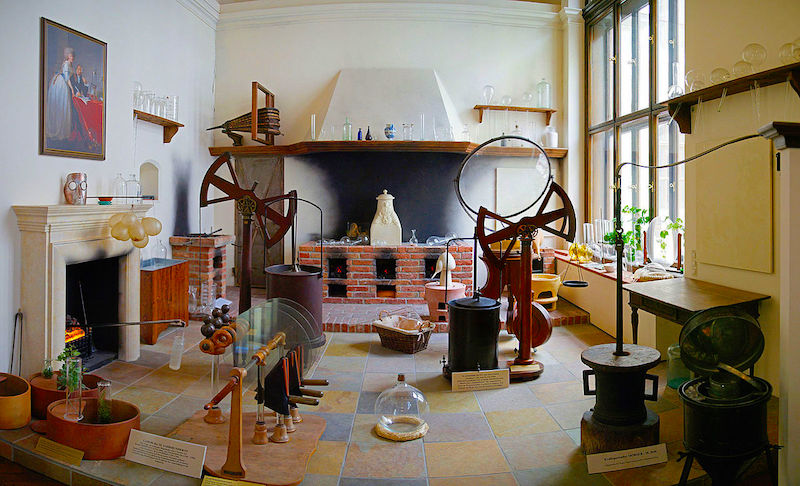 At Magnanville, from which Lionel had promised not to stir while fully intending to do nothing of the sort, Mme de Saveuse recovered her health and part of her serenity.  The company that surrounded Mme d’Aubemer was more active in the mind than in its outward habits, but the Maréchale’s house attracted very agreeable young ladies of the neighbourhood with whom Gudule rode and took the exercise that is all but indispensable at her age.  She had been in the country for almost a month when Lionel, returning from one of his frequent sojourns in Paris, brought d’Estouteville back with him.  During the twenty-four hours that he was to stay, there was talk of the experiments of a very gifted chemist, a friend of the Maréchale’s who was present.  One question led to another, and one idea to another, until he felt moved to offer a little course in experimental physics1 adapted for these ladies of high society if he could be furnished with a space to use as a laboratory and enough time to have the necessary equipment brought.  This idea enchanted Mme de Saveuse, and the Maréchale willingly lent a hand.  A pavilion at a right angle to the main courtyard was chosen in which to set up the laboratory.  Two hours had hardly elapsed when the workmen, under the supervision of M Chevreux, were working on adapting it to its new purpose.  D’Estouteville had been among those most ardent to clear away any difficulties.  He adored chemistry, he said, and had shown himself to be at once sufficiently knowledgeable and sufficiently ignorant, according to need, in order to excite the zeal of the learned chemist and to be called upon quite naturally to be his assistant for the course, of which he already had quite a good notion, but during which he would also have so much to learn; thus he would have to spend quite a goodly number of days at Magnanville, seemingly without any premeditated idea doing so and purely for the love of science.  He left the same evening for Paris, taking M Chevreux with him and answering for both of them that they would come back together the following week.