A Novella of the 18th Century, Chapter 13

In Chapter 13, a catastrophe befalls the Aubemer-Saveuse household.

M de Saveuse did not return to the Hôtel d’Aubemer until after everyone had retired, and he left in the morning before the breakfast hour.  That used to happen often, but this time the Maréchale took note of it with unease; not Gudule, however, who had much else to think about.  She had passed the rest of the previous day in febrile agitation, and she wanted to appear at supper to learn the result of M Chevreux’s visit to the Hôtel d’Estouteville.  Reassured by an accurate and truthful account of Henri’s condition, she retired early and, alone in the solitude of her rooms, gave herself over to a serious examination of her own heart.  If that cruel morning had bared her secret to the public, it had been by way of revealing it to herself, as well; she had to admit the illusion that she had been labouring under for a long time and was forced to recognize that Henri reigned despotically over her soul.  The more she plumbed its depths, the more she found it filled with him, to the point of forgetting the pain it gave her for a few moments and abandoning herself to the ineffable sweetness of a love that she felt to be returned.  Gudule was not, however, the sort of woman to delight in such languors.  Once she had recognized the ailment, she sincerely and courageously desired to apply an effective remedy.  Drying her tears and composing her face, she entered the Maréchale’s room the next morning just at the moment when, dressed and ready, she was about to leave it.

“Aunt,” she said in a firm tone, “I must go and I wish to go to Saveuse.  At breakfast, let us speak of my journey as an agreed upon thing.”

The Maréchale contemplated her for a moment, and then said with the most tender understanding, “My poor Gudule, how guilty I am for having exposed you to a danger that with my experience I should have foreseen.”  So saying, she opened her arms to the young woman, who threw herself into them, and, renouncing the artificial composure she had arranged for herself, dissolved into tears.

“Yes, my brave child, you shall go, or rather we shall go, for I shan’t leave you.  But leave the preparations for our departure to me.  It can’t be right away.  There are appearances to consider.”

“Oh, Aunt, the most important consideration is for me to get away!  We know that I love him.  Alas, he knows it, too!”

“Have no fear, child, you shall not see him again.” Gudule felt a cold blade slip into her breast. “But Lionel must be prepared for this absence.  Have you told him your plans?”

“I have not seen him since yesterday morning.” And so the thought of her husband came to her for the first time.  Accustomed to not counting on him in difficult circumstances, and not reproaching herself for any failings towards him, she had not summoned him inwardly to the intimate council she had been having with herself, and which had been turning her inside out for several hours.  However, the Maréchale’s question had brought her husband’s absence to her notice and she recognized that she owed him some consideration.

“Let me handle this business, and count on my sincerity, my dear.  Now dry your tears and let us go have our breakfast as usual so as not to evoke the servants’ suspicions — they’re the most incorrigible spies.”

Their light repast promptly dispatched, the ladies established themselves in the small salon, where the habits of their busy lives assured their solitude until an advanced hour of the morning.  They soon fell back into the train of thought they had been absorbed in earlier.  Gudule opened her heart with the frankness that was characteristic of her.  Now that she herself was reading her heart, she did not seek to hide anything, for she wished to fight with that strong will that one needs in order to prevail.  While encouraging these noble efforts, the Maréchale sympathized with her pain.  Though the circumstances of her life had helped her evade the torments of passion, Mme d’Aubemer possessed one of those delicate organisms which understood the sorrows of others without having experienced them herself.  No one was better able to identify with her friends’ afflictions or to find the right words to assuage them.  Quite convinced that Gudule could not be distracted for even a moment from the assault she felt herself to be under, her aunt encouraged her outpourings.  The morning was drawing to a close when Mlle Julie requested the Maréchale’s presence in her room, where some merchants were waiting for her.  She hastened to leave, while Gudule turned away to hide her pale and tear-stained face.

Hardly had the door closed behind them when Mlle Julie stopped short: “Oh, Madame, what a misfortune!”

“It’s not that I like him, quite to the contrary, and everyone in the house is revolted by his conduct.  However, the Countess is so good that she will be in despair.”

“In despair at what?  Explain yourself, I beg you.”

“Killed by a sword thrust.”

The Maréchale’s legs trembled under her.  In the blink of an eye, she saw all the consequences of this painful event, never doubting that Henri d’Estouteville had been Lionel’s opponent.  She was hardly able to stagger to her room, where a very pale and agitated young man was waiting for her.  Dropping into the first chair she came to, she said, “Well, Sir?”

“Alas, Madame, my duty is very painful, but I thought I had better warn you by preceding the arrival of the all too inanimate body, which is being transported hither, by a few mintues.”

“Where did the duel take place?”

“The duel? Oh, Madame, there was no duel.  Count Lionel arrived at our house very early, asking my mother for breakfast.  While it was being prepared, he talked my brother and me into doing some target practice.  He hit a few.  Some other young fellows were there.  M de Saveuse invited them all to breakfast in a nearby café, sending my brother to make our excuses to my mother.  He seemed very excitable.  We drank some champagne, but he didn’t get tipsy.  He suggested going to the fencing-school.  He wasn’t very good with the sword, and had often been wounded, which seemed to exasperate him. ‘I want to know how to kill a man,’ he said. ‘Once, in Italy, I saw a thrust that seemed to me to be infallible.’  ‘Let’s try it!’ we all cried.  ‘No, no,’ he replied, ‘in order to show you, I have to practice it first with someone who won’t be able to guess it’s coming.’  ‘I have just the thing for you: here’s a young man having his second lesson, and who only knows how to hold his foil firmly in hand,’ interjected the fencing-master, pointing to a tall, rather bashful boy, who was blushing like a girl.  Count de Saveuse insisted that they be put in a practice-room by themselves, wanting, he said, to be able to have several attempts at re-creating the thrust without being bothered by an audience.  We heard him giving some instructions to the young man, advising him to hold on to his weapon firmly.  A moment later, we heard two simultaneous cries and the sound of a body falling.  We rushed into the practice-room, where we found the young man on his feet, as still as a statue, with the bloodied stump of his foil in his hand, and M de Saveuse on the floor in the grip of horrible convulsions.  A doctor who happened to be there administered first aid to the Count, but the broken foil had caught him under the eye and penetrated his brain.  He only survived for a few minutes, and uttered no words.  How did this accident happen?  We are reduced to conjecture because the unfortunate young man who had the misfortune of killing him has not been able to produce a syllable since the fatal event.”

The Maréchale, having recovered herself a little during this recital, thanked the narrator, whom she recognized as one of Lionel’s boon companions.  After having given orders for the reception of the sad cortege, and for the summoning of the most reputable undertakers, she returned to her niece to prepare her for the blow that was about to befall her.

Two days later, Mme d’Aubemer departed to escort Gudule to Saveuse, where she wished to receive Lionel’s remains, which were being transported there.

The Maréchale left instructions with her staff to go and gather news about several unwell people and to transmit bulletins to her by each post.  Among these invalids was Henri d’Estouteville. 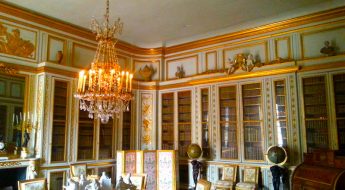 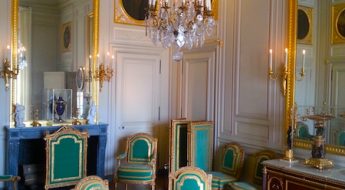 A Childhood at Versailles, Part 3.1 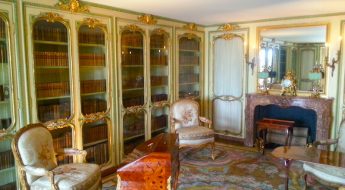