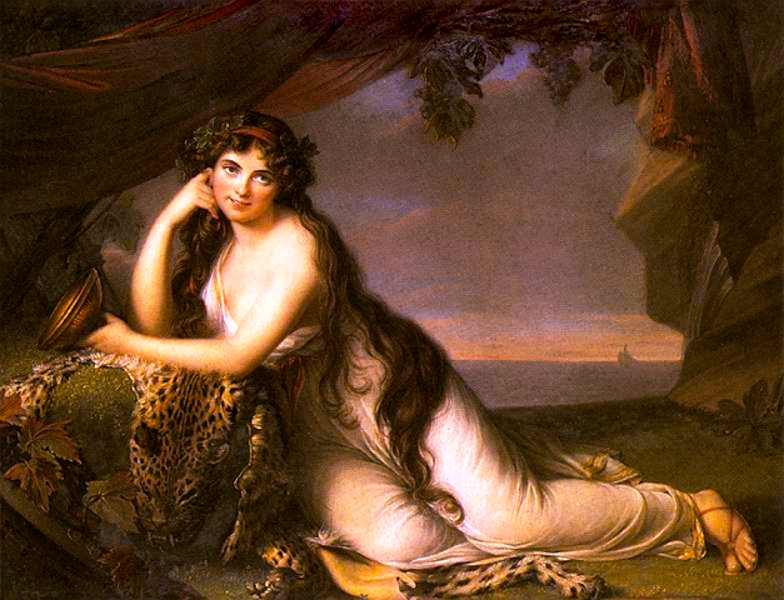 The chapters are quite lengthy, so I’ve broken each one into several parts. In Part 5.3, the author recounts the extraordinary early career of the celebrated Emma, Lady Hamilton, who in the 1790s was in high favour at the Court of Naples. Young Adèle sometimes assisted Lady Hamilton in her famous ‘attitudes,’an experience she vividly describes here.

The Queen tried to keep my mother in Naples.  She even offered her a little house, but we still had faith in our own resources then.  The Queen, in any case, had a reputation for capriciousness, and Lady Hamlton’s period of favour was beginning.  This Lady Hamilton had such notoriety that I believe I must speak of her.

M Greville, coming into his kitchen one day, saw at the corner of the chimney a young woman with only one foot shod, for she was darning the thick black stocking that was to cover the other one.  Lifting her eyes, she revealed a celestial beauty.   He discovered that she was the sister of his groom.  He had no great difficulty getting her to climb the staircase and establishing her in his drawing room.  He lived with her for some time, and taught her to read and write a little.

The affairs of this very disorderly young man having been set alight, he found himself obliged to leave London suddenly.  At that time, his uncle, Sir William Hamilton, the English minister to Naples, happened to be on leave.  The young man told him that his greatest grief was the necessity of abandoning a most beautiful young creature that he had in his house, who would find herself on the street.  Sir William promised him to take care of her.

In fact, he went to fetch her at the very moment that the bailiffs were expelling her from Mr. Greville’s, and soon he was head over heels in love with her.  He took her to Italy.  I do not know what role she played in his life, but he ended up marrying her after a few years.