The salon hostess and writer Mme de Boigne (1781-1866), née Adèle d’Osmond, was literally born in the Château de Versailles, and spent her childhood at the court of Louis XVI and Marie-Antoinette.

In the first chapter of her memoirs, Mme de Boigne writes, “It was soon after my parents settled into Versailles that I came into the world.  My mother had already been delivered of a still-born infant, so I was welcomed with transports of joy and pardoned for being a girl.  I was not swaddled, as was still the custom, but dressed in the English manner and nursed by my mother in the midst of Versailles.  I promptly became the plaything of the princes and the court, all the more since I was very well-behaved, and also since children in those days were as rare a species in a drawing room as they are common and tyrannical today.”

This remarkable circumstance is due to the fact that her mother was a lady-in-waiting to Mme Adélaïde, one of the daughters of Louis XV.  She and her sisters were generally referred to as “Mesdames,”and later, in the reign of their nephew Louis XVI, as “Mesdames Tantes.”  It was not usual for ladies-in-waiting to keep their children at court, but Mme de Boigne’s parents, the Marquis and Marquise d’Osmond, chose — and were permitted — to do so. 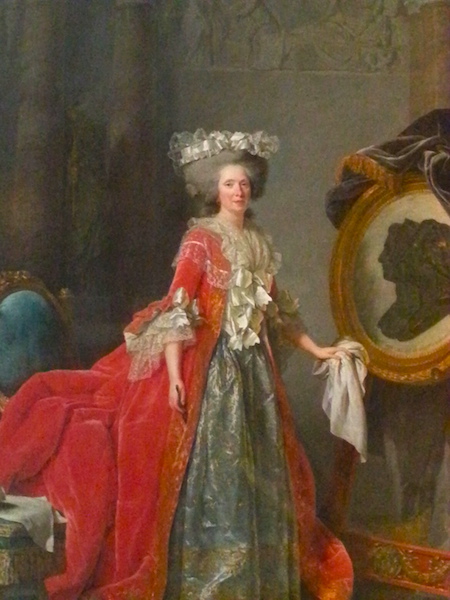 Adélaïde de France (1732-1800), “Mme Adélaïde,” daughter of Louis XV and aunt of Louis XVI, Louis XVIII, and Charles X. She was also the employer of Mme de Boigne’s mother. This portrait of her is in the Château de Versailles.

Regular readers of this blog will know that I’ve already translated a novella by Mme de Boigne.  Entitled The Widow of Field Marshal d’Aubemer: A Novella of the 18th Century, the first draft is available to read for free in English on this blog.  There are fifteen instalments.  I will probably self-publish this book in 2018.  In the meantime, I’ve decided on my next translation project.

Since there is so much contemporary interest in the court of Marie-Antoinette and Louis XVI, I’ve embarked on a partial translation of Mme de Boigne’s memoirs, which were posthumously published in 1907, more than 40 years after her death. 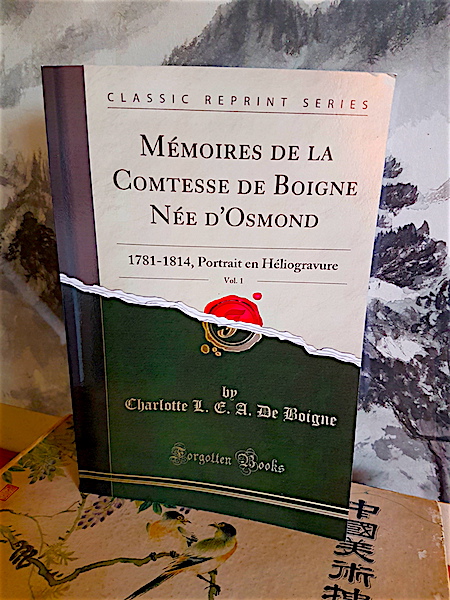 The cover of a new reprint of Mme de Boigne’s memoirs. Her first name is given here as Charlotte, which was indeed one of her baptismal names, but she was more commonly known as Adèle or Éléonore-Adèle in her lifetime.

I’m going to translate only the first 5 chapters.  Those are the ones that take place mostly at Versailles.  They cover the years from the author’s birth in 1781 to her family’s emigration to England in 1792.  In the first four chapters, Mme de Boigne recounts many fascinating anecdotes and observations of court life on the eve of the French Revolution.  Most of them were presumably told to her by her parents, probably during their exile in England.

The chapters are quite long, so I intend to break them up into several parts each, which I will post separately on the blog.  I hope to complete the first post in the next few days.  If you’re following Versailles Century on Facebook, keep an eye on your newsfeed for an announcement! 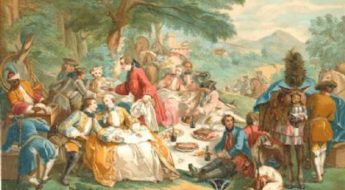 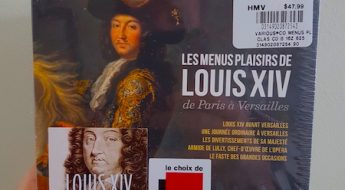 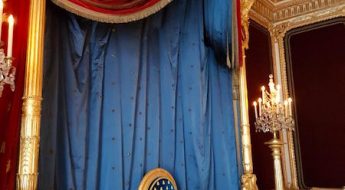